‘If you loves food and have to travel around often as part of your job, it is inevitable that sooner or later you”ll start looking for decent restaurants to try when you”re on the road. That is (in my mind) how the Michelin Guide got so popular in the first place, and is exactly why I ended up at Dadong Artistic Conception of Chinese Cuisine. Quite a mouthful, yes, but it is essentially one of the newer branches of the famous Dadong roast duck shop, which just happened to be close to where I was staying.

The location of the restaurant is peculiar enough: it”s located at the 5th floor of a mall that is essentially deserted. Not knowing that the restaurant is only accessible from a separate lift and not via and of the mall escalators, I ventured into the shopping centre. It was eerily empty. All the shops were open, all the lights were on, as were the escalators – but there was nobody there. Not even the staff. I wandered through 3 floors of deserted yet open shops. It was as if all human being in the mall has vanished.

Anyway, having eventually found the shop, I was lucky enough that there happened to be seats available. Not tables. Seats. The seat I was shown was the essence of the Chinese concept of grandeur. In a rather large separate dining area was a long table not unlike those at Hogwarts (or any grand halls in Europe, but that”s the idea), except that it was much wider – the table was as wide as a normal door is tall. It would be impossible for persons sitting opposite to converse. That mattered not, though, as most seated on that giant table were either couples or dining alone, and the hugeness of the table has provided sufficient distance from each other to be comfortable.

Fortunate for me, they do serve “for one” portions of the famous Dadong roast duck – that is, half a duck. That was what I went for, along with some veggies and a Chinese Marinated Foie Gras. The foie was first to arrive on the most giant of plates. It seems their idea of plating here is to have a huge plate with small actual carrying area. Fine with me, as long as the food is good! This Chinese foie gras was soft and rich and delicious, but I do prefer the Chiu Chow variety I”ve had in some restaurants in Hong Kong. 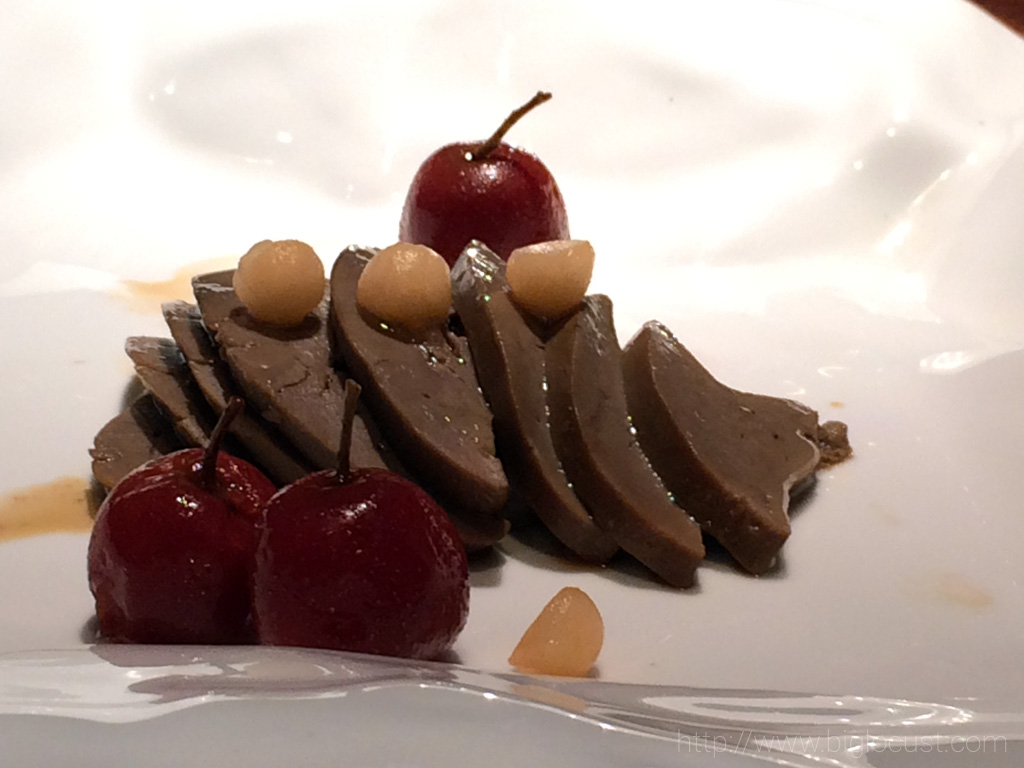 Then, to make myself feel slightly less guilty about the excessive fat and cholesterol of this meal, was the Stir fry bean sprouts. This is something that most proper Chinese restaurant should be able to deliver without much problem, and Dadong is no exception. This was superbly executed, with just enough garlic for flavour, and the bean sprouts were fresh. 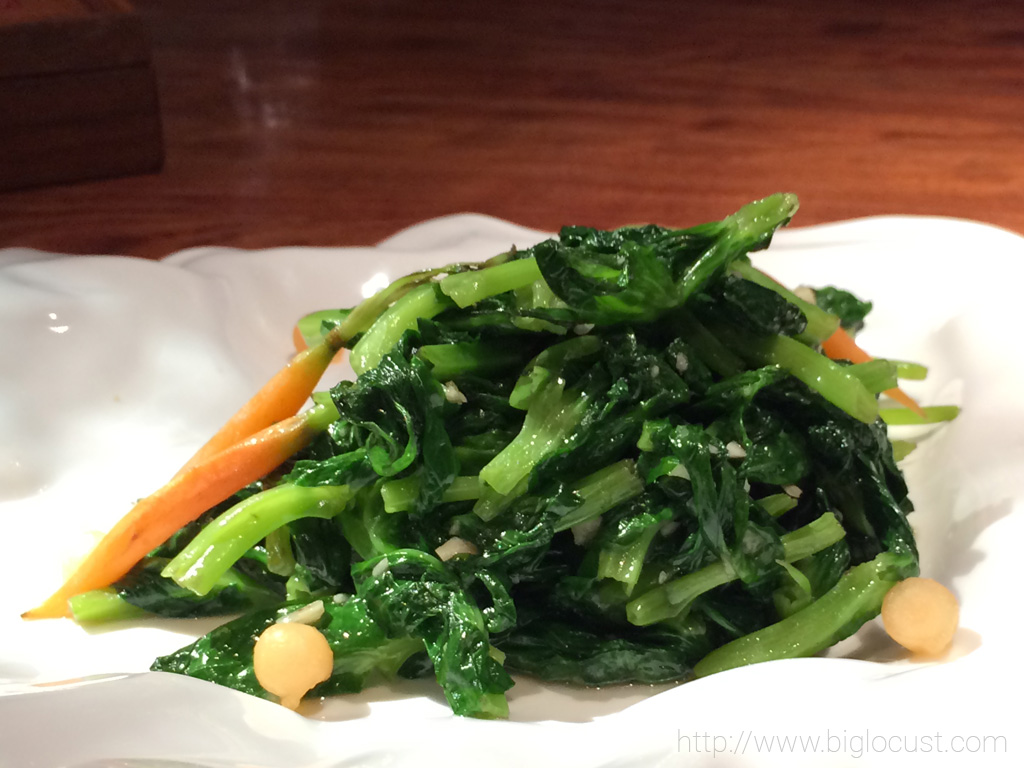 Finally was the famed Dadong roast duck. This was all the meat that was carved from the half-duck I ordered. Only the best parts were sliced and the carcass were discarded… or more likely taken back to the kitchen for other purposes. The skin was superbly crispy and without the commonly dreaded layer of fat underneath, and the flesh succulent. The waitress, seeing that I was obviously not a local, came to assist and taught me how to properly eat a roast duck 3 ways – and that was definitely more elaborate than how we do it in Hong Kong. Not expensive, either – the half duck costed just shy of RMB 200, much cheaper than any roast duck in Hong Kong. I haven”t had the chance to try other roast ducks in Beijing, but this was definitely a good one, and a fitting conclusion to an enjoyable dinner. 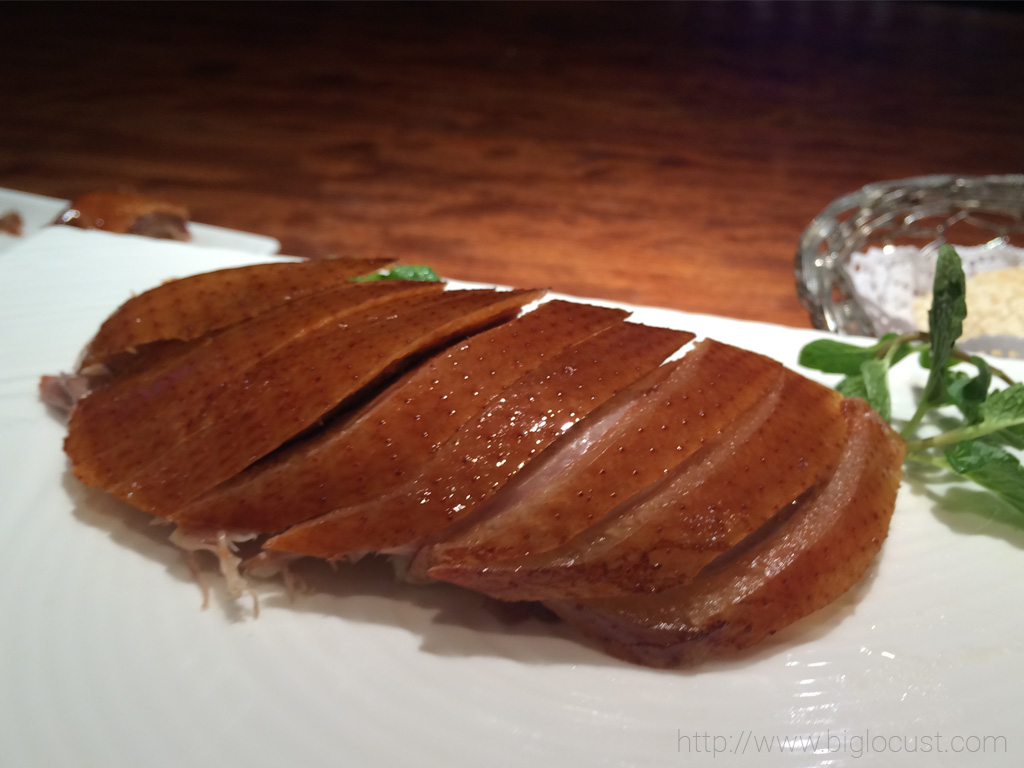 After all were finished, a wide selection of complimentary desserts were served, but I was too full to touch any.

So in the end, what does “artistic conception of Chinese cuisine” in the restaurant’s name means? I had no idea after dining there. The food served delivered what one would expect of the Dadong name, but I really couldn’t see how “artistic” it was. Except for the fact that they had put some thought into how the dishes were plated – and maybe the giant 2 foot long, 1 inch thick menu. If I were to stay in the area again in the future and don”t have any good idea for dinner, I wouldn’t hesitate to re-visit Dadong. Its roast duck alone is reason enough.