The one thing that has been holding us locusts back from making steaks at home is the lack of confidence in controlling done-ness.  Think about the traditional methods:  1) cook it on a very hot pan, flipping occasionally, and time.  2) sear it on a pan, then cook it in the oven.  3) cook it on a grill, flipping occasionally, and time.  All of these methods are hit-and-miss and require lots of experience to do well.

Even then, an occasionally overcooked, undercooked or unevenly-cooked steak is inevitable, such as the one we recently had at The Kitchen in Macau.  Whilst experienced chefs may say how easy it is to control, how to poke and feel the steak to determine its done-ness, for us normal people such methods are almost mythical. That has changed with the popularization of sous vide cooking, which gives the home cook a chance at hitting the perfect steak every time they try.  Yet such water baths used to be expensive.

The latest ANOVA Precision Cooker by ANOVA Culinary, with its predecessor the ANOVA One, as well as a myriad of products from other brands, all priced at the affordable sub-US$200 price bracket, breaks the price barrier down.  These are mostly circulators, too, so there isn’t any giant one-piece water baths to store, but arm-length sticks that you mount onto a pot. Which is why we bought the ANOVA Precision Cooker.  There were some hiccups in the purchase process.  Having ordered back in October 2014, I didn’t realise that clicking the “buy” button doesn’t really mean you’ll get it in a couple of weeks.  Nope.  It meant I pre-ordered the circulator.  Wordings were added later saying it’s a pre-order, but not when I paid for it.

Anyway, the waiting then began.  Promises were made about delivery by Christmas.  Christmas came and passed, and so did New Year, until it finally arrived in late-January.  Whilst I definitely hope that they could have delivered much earlier so that we could have had a nice steak for Christmas, it was worth the wait thus far. 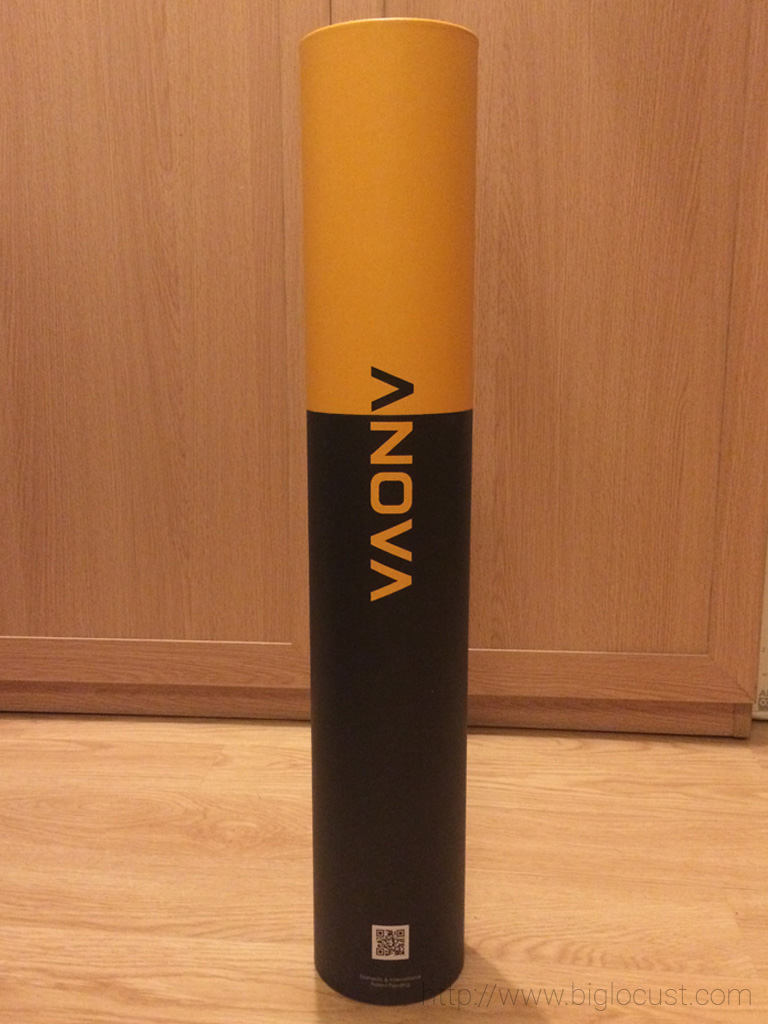 The ANOVA Precision Cooker in its cylindrical box

The first thing to notice is the rather pretty packaging.  The yellow top half pulls off and the mount is stored in the top, stuffed in foam.  The circulator itself goes down the black half with the plug near the bottom.  The manual, however, is only put in the larger box which this cylinder came in, along with the receipts.  Whilst this cylinder is good looking, it is perhaps not the best way to store the circulator, as it is a nightmare to put it back with all the foam and tight space.  I’d rather they used a rectangular box instead. 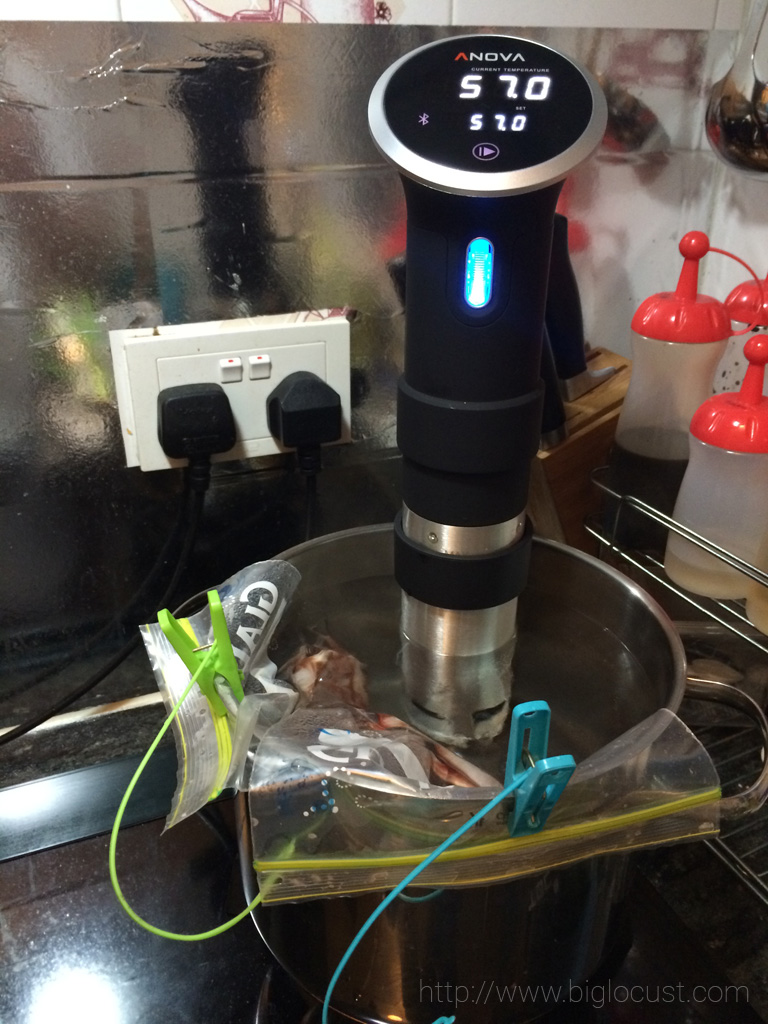 Mount it on a pot

The ANOVA Precision Cooker itself is easy to use, almost plug-and-play.  Plug it in, mount it on any pot with water in it (the mount is very sturdy, by the way), set a temperature with the wheel, press start.  When the temperature is right, it will beep.  The smaller number at the bottom is the target temperature, and the upper larger number is the temperature it’s currently at.  Put steak in for a period of time, and you’ll have a perfectly cooked steak.

In use, as long as you have enough water to cover the inlet and outlet (?) it should work fine.  However I found that if you have a bit more water, enough to cover the bottom two inches of the circulator, it would operate much quieter.  When there’s less water than that it still works, but splutters quite a bit. So how did it go?  We tested it on some USDA Choice tenderloin which we took from my parents freezer (always the best to test with stuff you didn’t pay for!).  These tenderloin were cut way too thin, only around half an inch when frozen, so they would be a nightmare too cook on a stove – they would overcook to oblivion in a heartbeat.  We used the water displacement method to pack it in ziploc bags, and cooked at 57°C for 25 mins.  Then they were smeared with olive oil on both sides and finished on a very hot cast iron pan, for ~15 seconds on each side, adding butter and brushed with a bunch of thyme. Here it is: 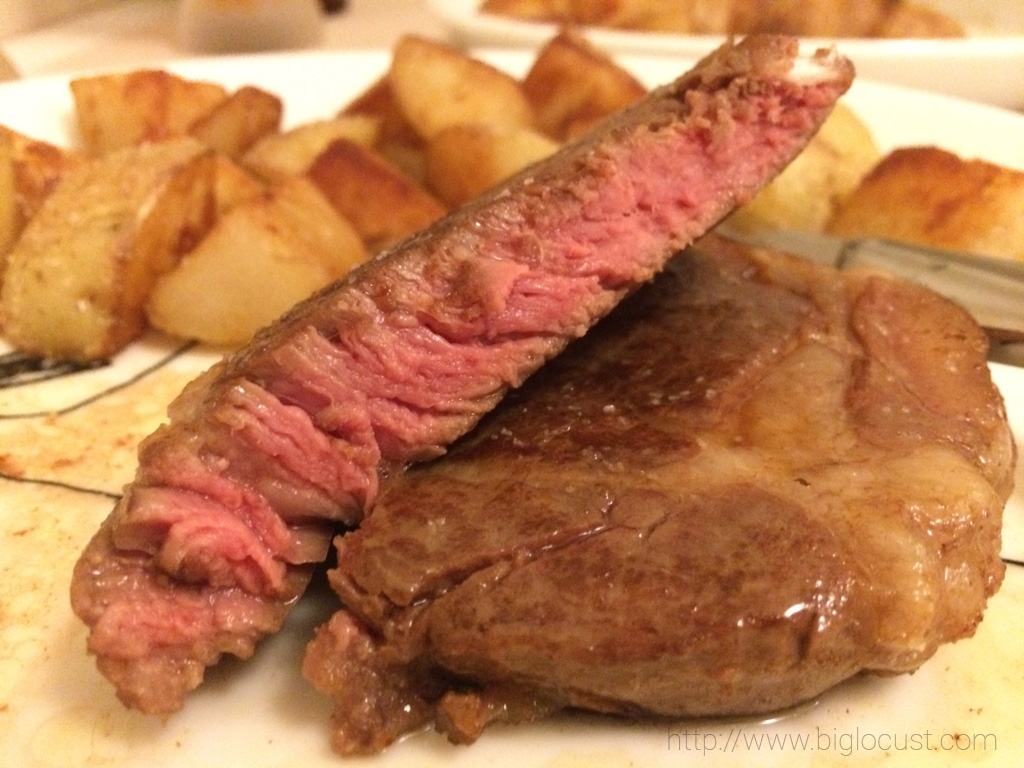 We would certainly get better steaks to cook with next time given how well this turned out.  I never imagined steak so thin can be properly cooked by ourselves.  It would probably be better had I seared each side for a bit longer, though. As I haven’t tried any other circulators, I couldn’t tell whether the ANOVA Precision Cooker is better or worse.  What I can tell, though, is that I think it’s worth the buy.  At the price of half a dozen steaks that would inevitably be ruined by me if cooked on the pan, I think this was good value.  Not to mention all the other sous vide recipes that we can now try – salmon, eggs, veggies, potatoes and what not!