We have wanted to try Plat du Jour for a long time, but we don’t go to Quarry Bay often and on the few occasions when we did try to eat here without a reservation, the restaurant was either closed or past last order time or reserved for a party.  Finally, we have made a reservation for dinner on a weekday evening in January. Located next to Cod Father and opposite a few coffee shops on Hoi Wan Street, Plat du Jour is easy to find.  The rather tiny shop front and the front dining rooms of a handful of table in each hides a much larger dining area at the back.

We ordered three courses each, picking mostly recommended dishes, adding to the courses a half dozen oysters. The oysters, white pearl from France, were quite flavourful and briny.  No match with the ones we have had in Paris, for sure, but decent enough having flown thousands of kilometres to Hong Kong.  However, the preparation was lacking.  Two out of six had shell bits in it, which was quite a high percentage, and the percentage should have been zero.  The chef / staff probably need better skill at shucking oysters – or maybe ask the dude at Cod Father next door for help! 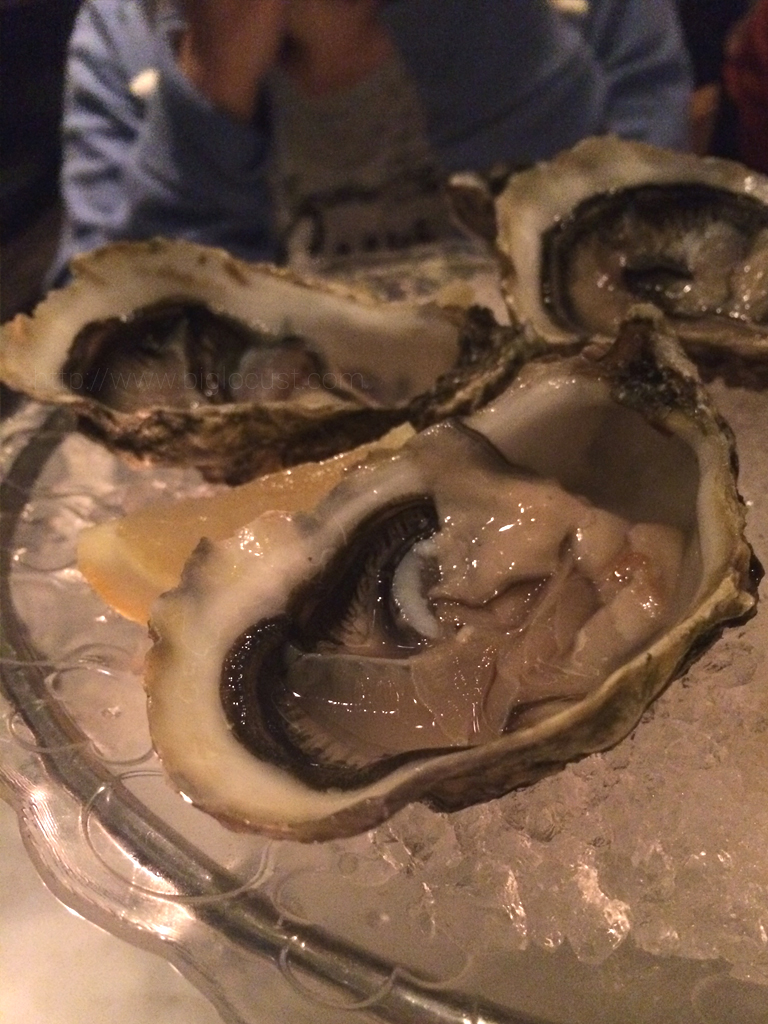 The Escargot bourguinon with parsley, garlic butter and baguette is almost a dish that is impossible to screw up.  The garlic butter was very potent, which was great, but more bread should be served with it to mop the butter up!  The escargot itself were surprisingly good, among the better ones I’ve had in Hong Kong, despite the almost unavoidable faint “once frozen” after-taste. 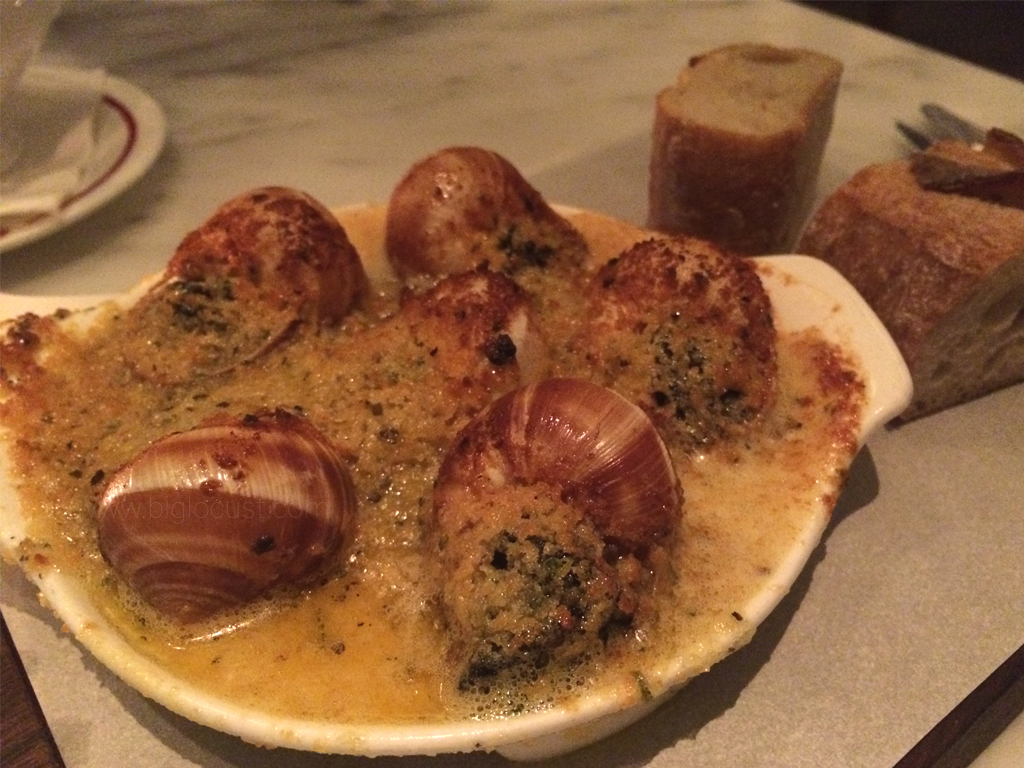 Lobster bisque, Locust Tunghok’s starter, was rich, creamy, velvety, full of flavour and the fragrance of the shells of many sacrificed lobsters.  A good honest dish properly executed. 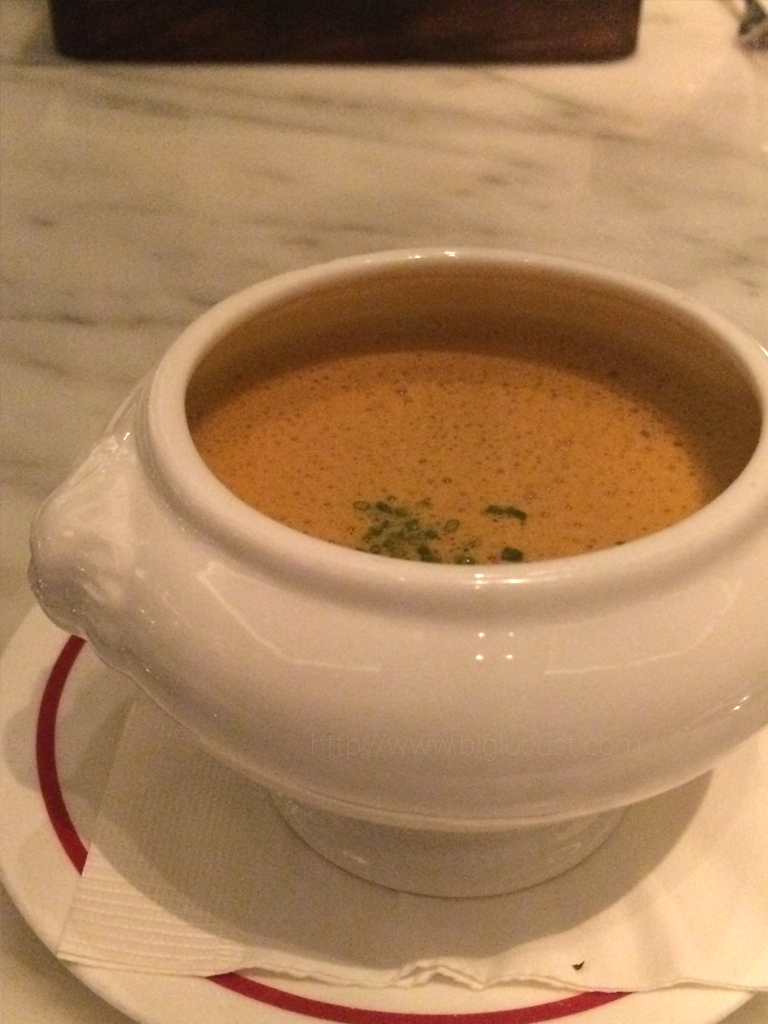 Grilled fillet of beef was very nice.  The tenderloin itself was cooked to medium rare as ordered, with a nice sear on the outside.  The maitre d’hôtel butter was rich and flavourful and complements the steak nicely.  Salad is very fresh, so fresh that it was surprising to see, as salads are often a bunch of half-wilted greens here in Hong Kong.  The vinaigrette had almost perfect balance.  That said, I’m always sceptical about such thick cut – especially when it’s grilled. The thickness dictates that if the centre is cooked to the required doneness the surface is always overcooked, yet if the surface is ok, the centre would be a bit on the raw side, like this one. Sous vide, anyone? 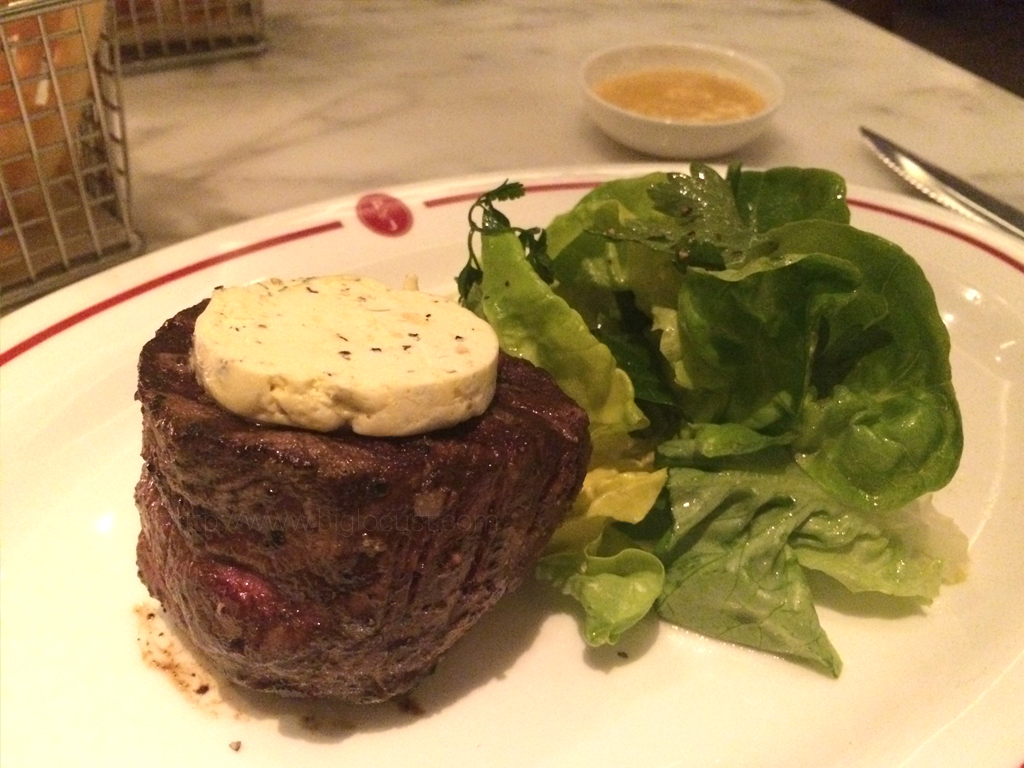 Bouchon mussels was Locust Tunghok’s main.  These were so fat and plump that I wondered where they got it from.  Much better than the ones I’ve bought from citysuper.  Very good (although not as good as those in Paris, but that ain’t fair!) 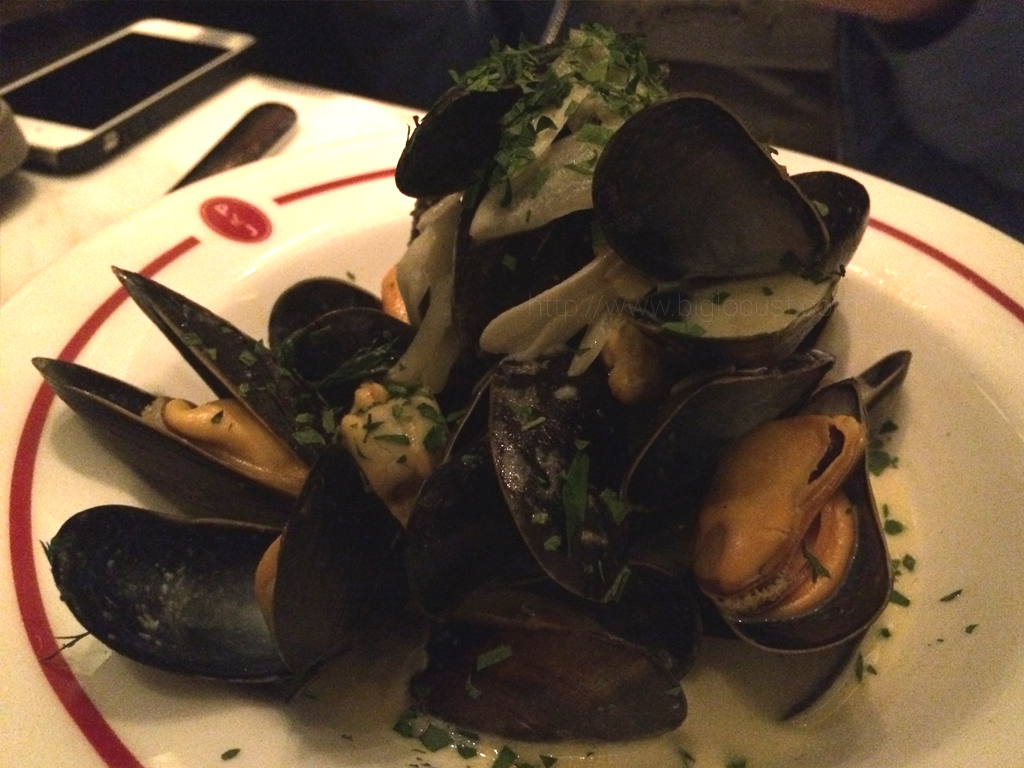 The frites that came with the tenderloin were quite nice, with a good enough crunch and fluffy centre.  No match for some triple-cooked chips at Dinner by Heston, but totally enjoyable.  The only complaint was perhaps that the portion could have been bigger. 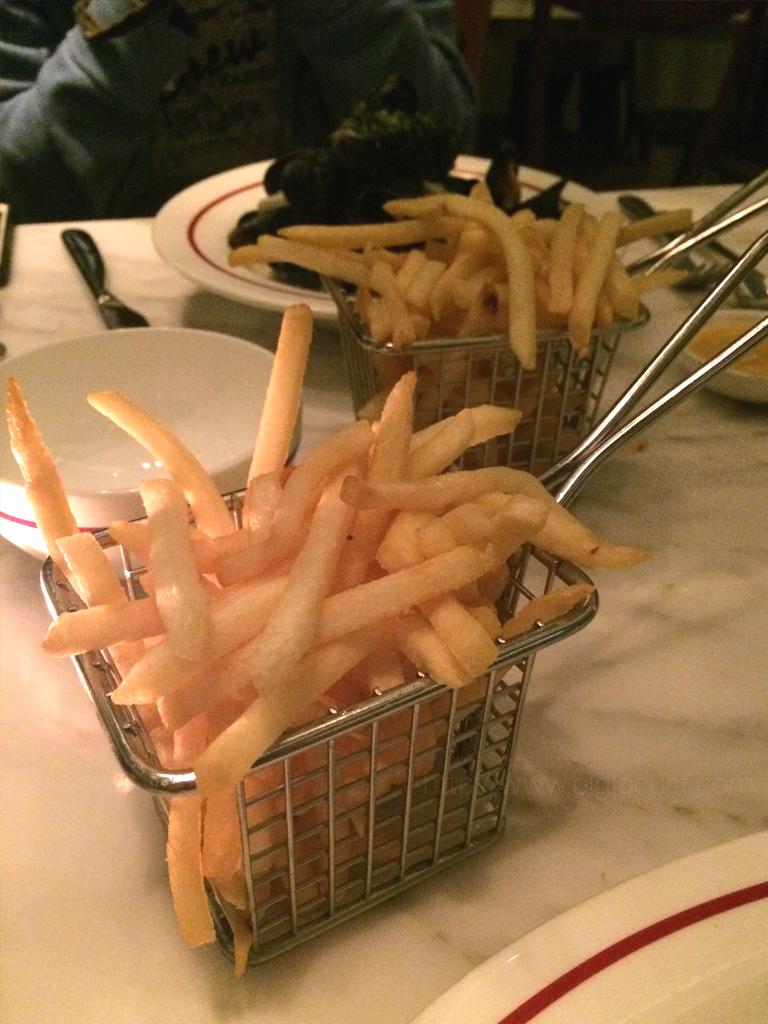 My dessert, the Apple Tarte Tatin, was unlike what I imagined – a slice from a giant inside-out apple tarte.  Not so, of course, as they construct each mini apple tarte separately.  That said, I do wonder why they had to specifically say “vanilla bean” ice-cream on the menu, when I didn’t really notice that many black spots on the ice-cream!  That is quite unlike my first attempt on making vanilla ice-cream, when a ridiculous amount of vanilla was used.  The caramelised apple were perfectly made, but the puff pastry succumbed to the combined weight of the apple and the ice-cream, and the moisture I suppose, and had lost its crunch. 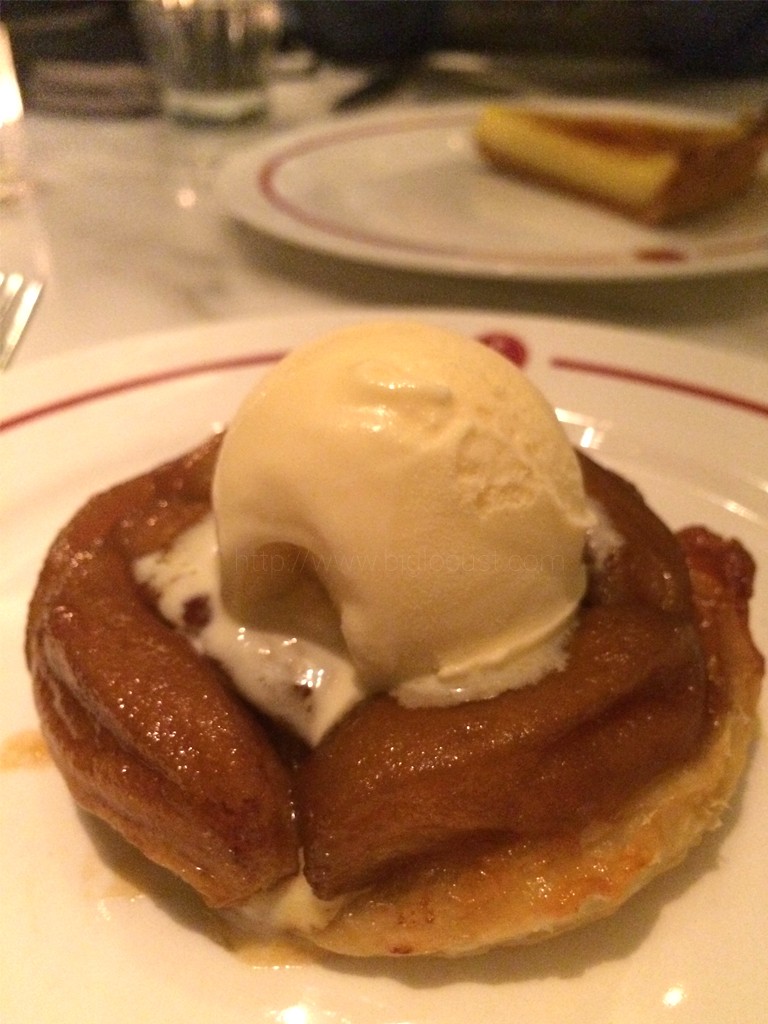 A decent meal with a not-too-hefty price, and as such Plat du Jour is a restaurant we wouldn’t hesitate to return.  Yet this have to be said:  whoever that was the PR for the restaurant, you don’t just re-post your customer’s Instagram photos on your own facebook page and pretend its your own.  You should at least credit it to the original poster, or seek permission.  I was quite shocked to see my tenderloin photo (above) was soon stolen to be posted on their page.  Really?  As a Swire Group restaurant?