‘Tis the time around Valentine”s Day, when restaurants show no hesitation in doubling their dinner prices and no remorse in serving only one set dinner menu that more likely than not include only fancy dishes that are neither their signature nor their specialty. Foie gras here and truffles there, and let”s bump the price! But being there for the food, we had no intention of falling into such traps. Fortunately, the normal degustation dinner menu is available for lunch at Guincho a Galera, so off we went. 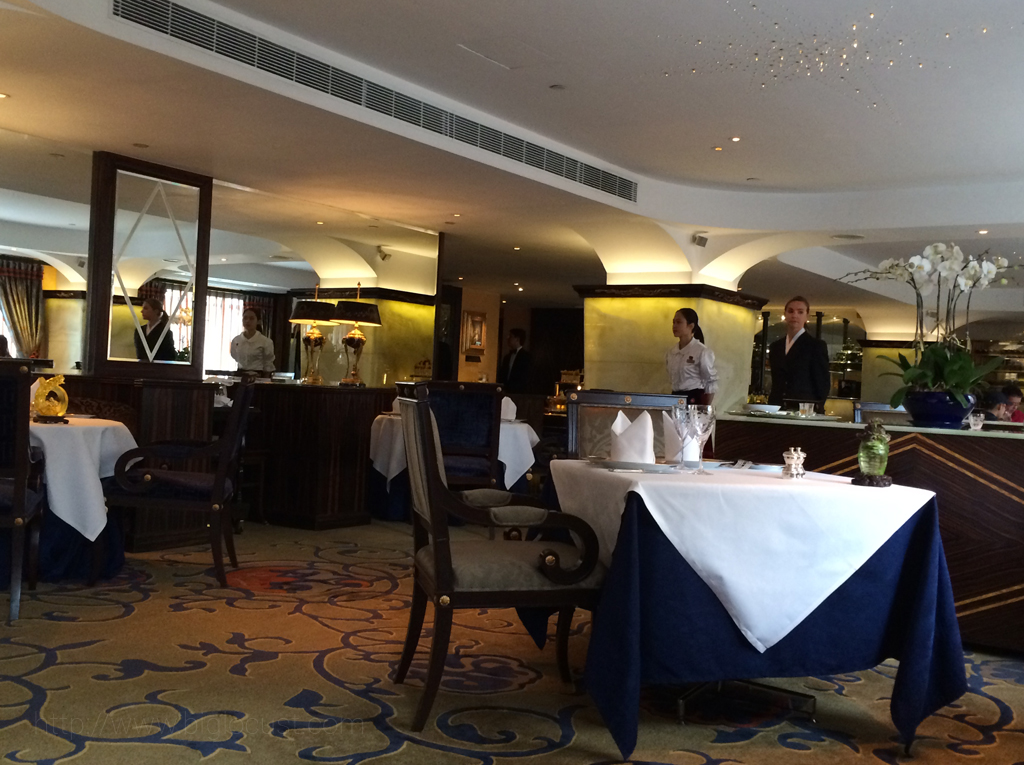 Dining area at Guincho a Galera

Guincho a Galera is an un-starred branch of the Michelin starred Fortaleza do Guincho in Portugal. Located in the previous location of Robuchon a Galera, the decor looked pretty much unchanged. Purely by chance we got the table we sat at years ago, when this was still Robuchon. 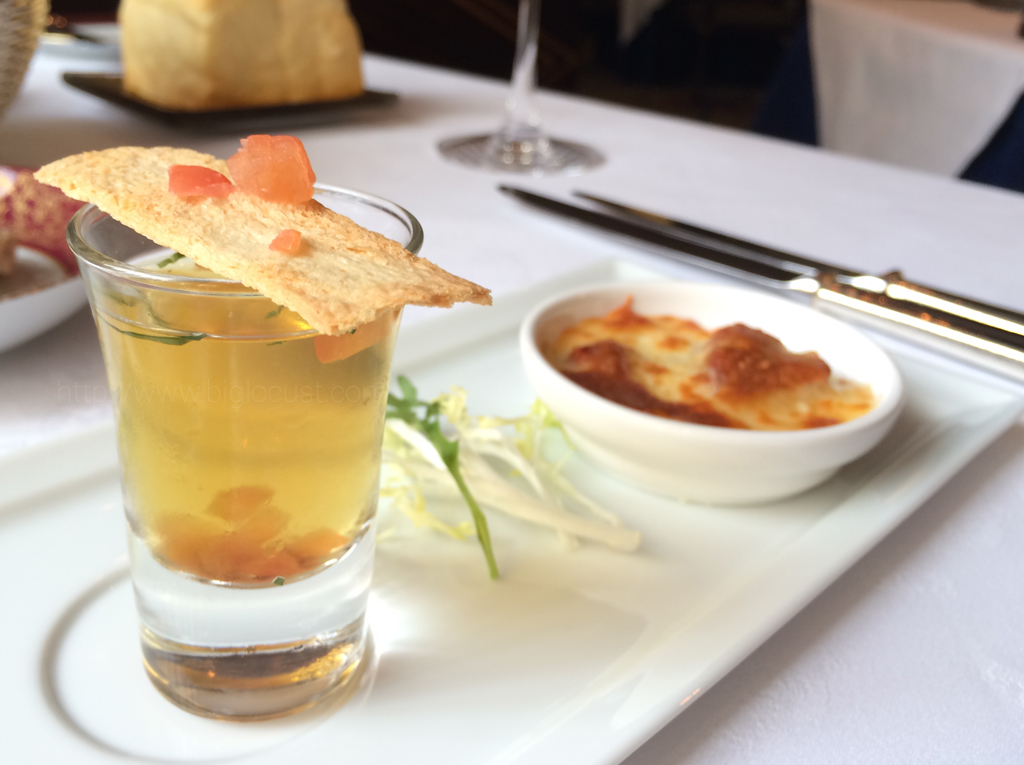 First to come was the aperitivo, a combination of a shot of tomato consommé and a cheese and chorizo gratin. This was the highlight of the meal by far – the (cold) consommé was clear and fresh, and works well with the molten chees n chorizo. That said, one would hope for better instruction from the waitresses, who advised to eat the gratin first. No. It”s much better eaten together. 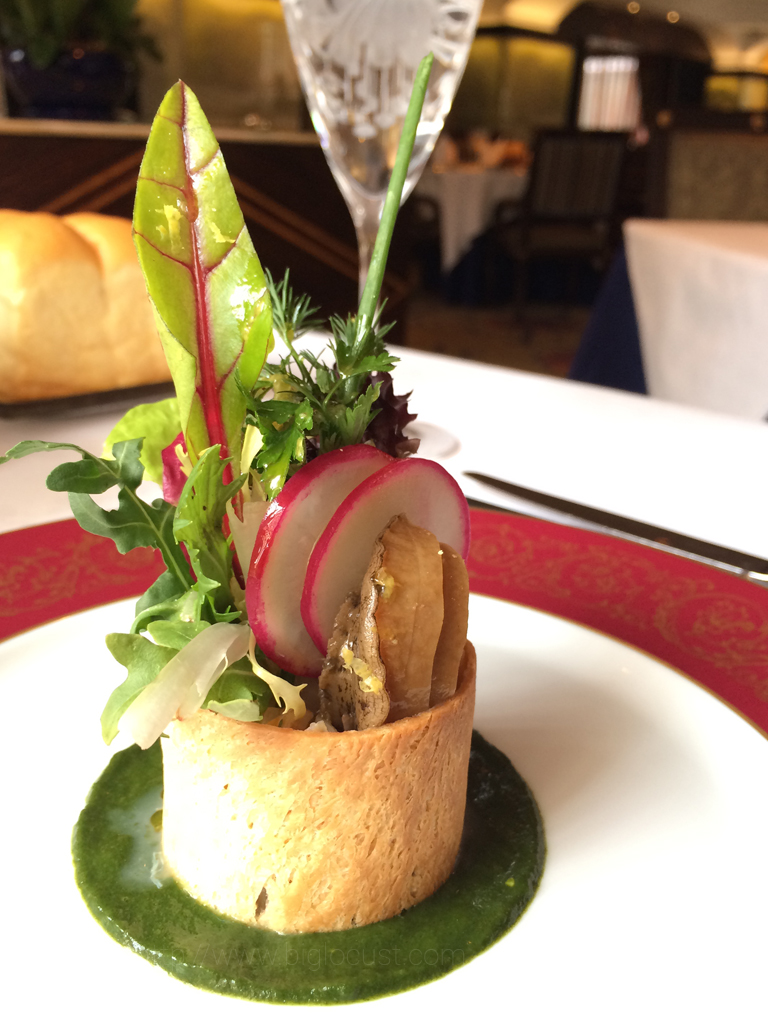 The first course, abalone and mixed seafood marinated in herbs served with spring vegetable and coriander purée, was a sight to behold. Meticulously “planted” in a pastry ring, the picked veggies and seafood were decent but mediocre. Perhaps it was the abundance of bits and pieces of seafood – abalone, crab, shellfish, you name it, that muddled up the flavour. Or perhaps the balance of dressing was off. In anycase, this was an underwhelming dish that did not deliver what its presentation promised. 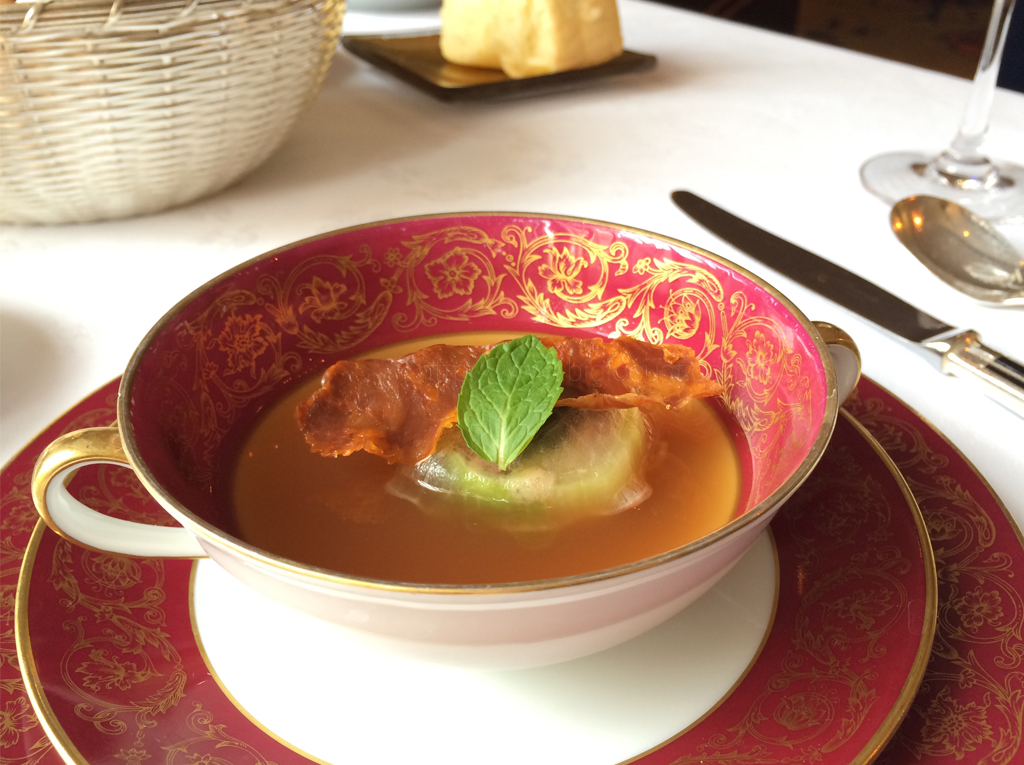 The soup – Meat consommé with Portuguese ham, was decent. The ham was rich with strong flavours, and so was the soup. The slice of truffle was a bit of a cheat though, enriching the fragrance. That said, it was more of a soup than a consommé. One would expect a proper consomme to be much clearer!

Roasted salmon with “Galegas” olives, tomatoes and herbs was only fair, and neither of us enjoyed it much. This wasn”t a fault of the dish though, as it was properly cooked. Lightly seared on the outside and rare in the middle, Juicy and without the dried texture of salmon cooked welldone. The problem was that two days ago we had a far superior version of 48-degrees cooked salmon at Chef Studio by Eddy… 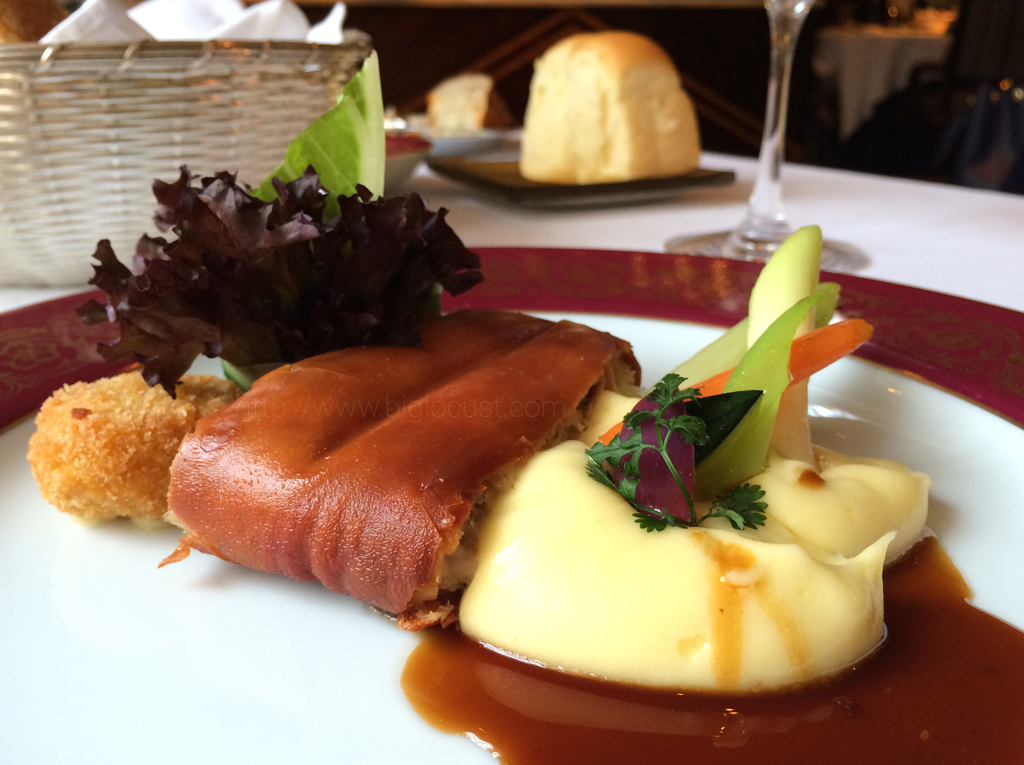 Then there was the real let down of the whole meal, roasted suckling pig with mashed potatoes and vegetables. The skin of the pig was hard but not crispy, and the seasoning was wrong. Locust tunghok’s one was well seasoned, but mine needed double the salt. Needless to say that as a result the meat was a chore to get through. The mash on the side had good cheesy / buttery flavour (50% butter used was my guess), but the texture almost resembled wallpaper paste and was not pleasant at all. Sometimes I don”t understand why its so difficult for restaurants to make some good mash potatoes. Do they just not care enough about a side? Anyway, on the side was a piece of deep fried batter with something inside – something we couldn”t tell what it was because it was 80% batter. 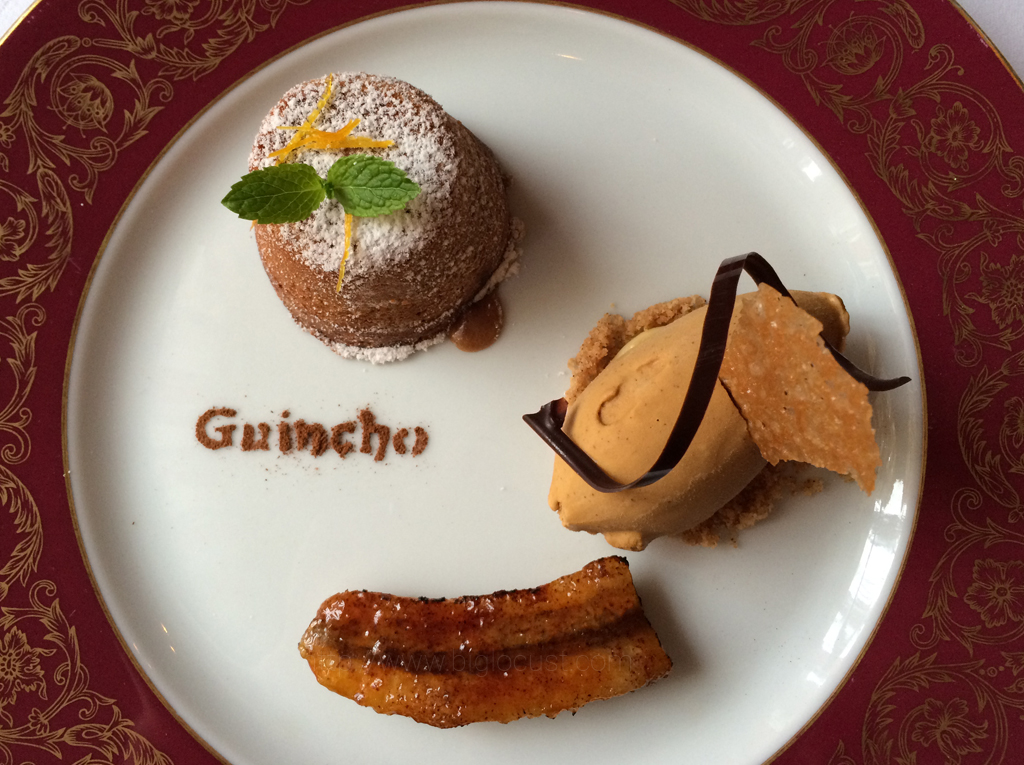 The dessert, chocolate fondant with caramelized banana, was again beautifully presented but underwhelmed in flavour. The fondant was nicely baked, with just a bit of soft molten core, but the chocolate was weak. Similarly, the caramel ice cream was decent enough but flavour could be stronger.

All in all, the dishes would have made a decent enough meal for the price ($580 per, +10%) had it not been the pace at which these dishes are served. There is quite a bit of difference between dishes served promptly and dishes served too soon. There was no break whatsoever from the moment the aperitivo was served and the dessert. Every time we finished a dish the waitresses would show up to take it away in no time, then the next dish would be almost immediately served. Great teamwork, but one could only hope that some time would be allowed between dishes so we can at least catch a breath! 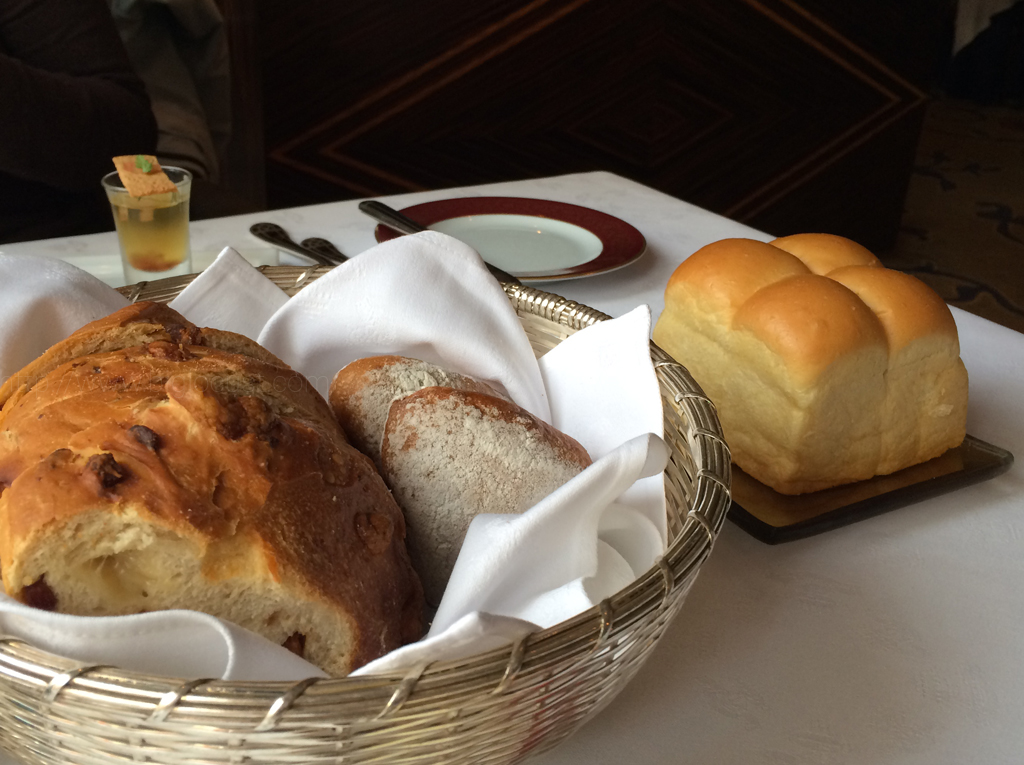 The rushed pace was our biggest problem with this meal. As a result of this, this nice looking bread basket became pretty much decorative. A shame, really!